AAN, affluent of the Feugh, in Strachan parish, Kincardineshire.

ABBEY.parish, containing parts of Paisley and Ban-head, all Johnstone, and several villages in Renfrewshire. Its length is nearly 9 miles, its greatest breadth about 5 miles, its area 15,924 acres. Real property of landward part in 1880-81, 79,886. Pop., quoad civilia, 34,393; quoad sacra, 13,637. The surface is partly flat, partly a variety of valley, undulation, and low hill-ridge, and partly the Gleniffer portion of the Fereneze Hills. Coal, ironstone, limestone, and aluminous slate abound, and are largely worked. Factories and other industrial establishments are numerous. There are many fine modern residences, several old mansions, and the ruined castles of Crookston and Stanley. The parochial church is part of the Abbey, to be noticed in our account of Paisley; and other churches are in Paisley, Barrhead, Johnstone, and Elderslie. 10 schools, for 2338 scholars, are in the parts outside of Paisley burgh, and 2 of them and enlargements for 1098 are new.

ABBEY, hamlet on the Tyne, 1 mile east of Haddington. A Cistercian convent was founded here in 1178, but is now extinct ; and a Parliament sat here in 1548.

ABBEY, village on the Forth, adjacent to Cambuskenneth Abbey, 1 mile east of Stirling.

ABBEY-CRAIG, precipitous hill, 362 feet high, H miles east-north-east of Stirling. It forms a striking feature and a commanding view-point in a magnificent landscape. It was held by the army of Sir William Wallace on the eve of the battle of Stirling ; and it is surmounted by Wallace's Monument, 220 feet high, erected in 1861-69 at a cost of fully 16,000.

ABBEYHILL, suburb north-eastward from foot of Canongate, Edinburgh. It was once aristocratic, is now chiefly modern and squalid ; includes a railway viaduct and a railway station, and contains a public school, built in 1880-81 at a cost of 9704, with accommodation for 824 scholars.

ABBEY ST. BATHANS, parish, with hamlet on Whitadder water, 4 miles west-south-west of Grant's House railway station, Berwickshire. Post town, Grant's House. Acres, 4797. Real property in 1880-81, 2630. Pop. 250. The higher land rises to heights of from 300 to 400 feet above the level of the plains, and the entire surface consists of haughs, slopes, and tabular hills. A priory was founded, here by a daughter of William the Lion, and became rich, but has entirely dis-appeared. The church adjoins the priory's site, and is part of an ancient structure. The public school has about 80 scholars.

ABBOTSFORD, mansion erected by Sir Walter Scott, adjacent to the Tweed, 2 miles west of Melrose, Roxburghshire. It cost upwards of 20,000, exhibits multiplicity of features in many architectural styles, includes parts and objects taken from many famous ancient edifices, has been aptly described as 'a romance in stone and lime,' contains numerous interesting souvenirs of Sir Walter, and is engirt by an estate which he transmuted from moorishness to much beauty.

ABBOTSFORD, quoad sacra parish in south side of Glasgow. It was constituted in 1877. Pop. 8891. 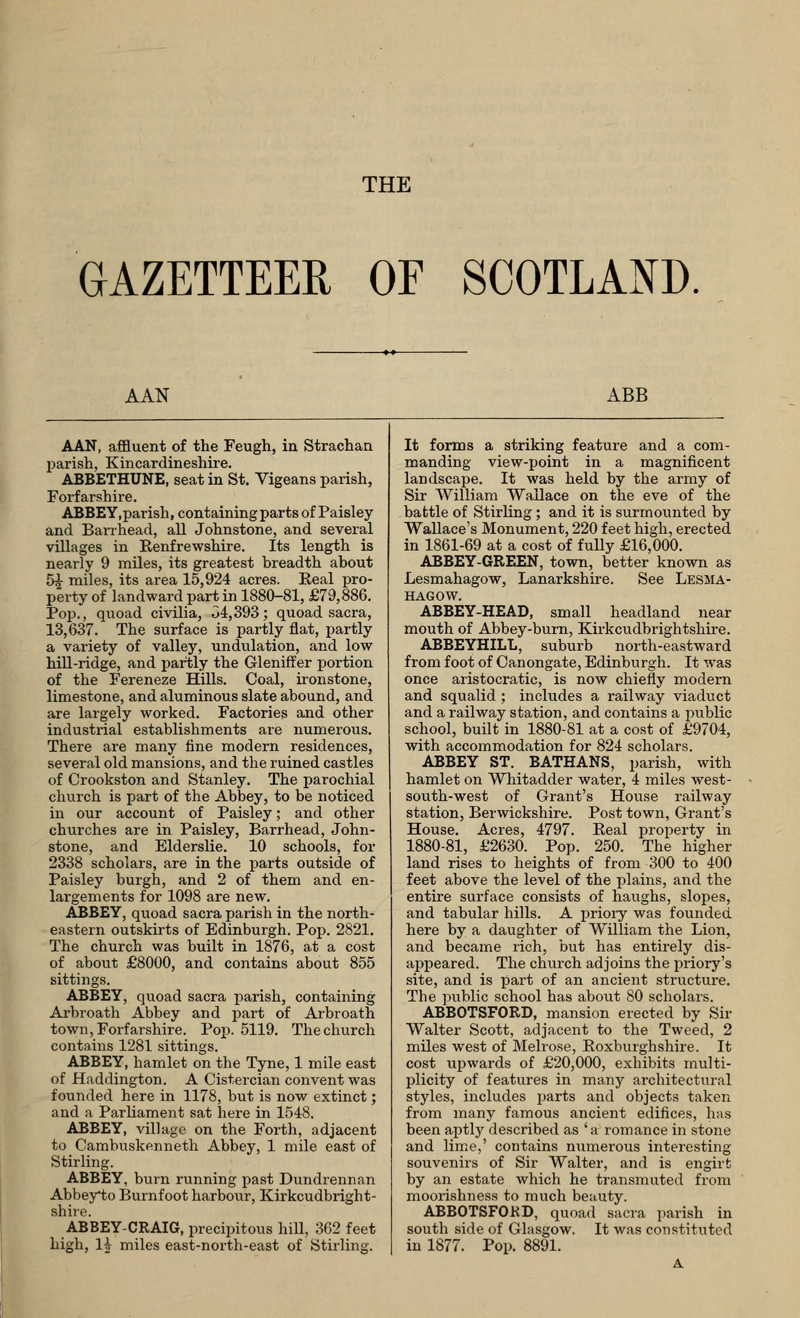