ABBOTSHALL, parish, containing Linktown suburb of Kirkcaldy, Fife. Acres, 4135. Real property in 1880-81, 10,341. Pop., quoad civilia, 6435; quoad sacra, 5316. The land for about \ mile from the shore is flat, and extends thence about 2 miles in pleasant swells and diversities. Raith House, lake, and grounds are delightful features; and Balwearie Tower is an interesting antiquity. The parochial church, a Free church, and a United Presbyterian church are in Linktown; and the public schools are under Kirkcaldy board.

ABB'S-HEAD (ST.), bold promontory 4 miles north-west of Eyemouth, Berwickshire. It consists of trap rock with mural front, but adjoins contorted cavernous stratified rocks. It had anciently a nunnery, said to have been founded by a Northumbrian princess ; and it has now a lighthouse, erected in 1861, with flashing light visible at the distance of 20 nautical miles.

ABDIE, parish, containing Mount Pleasant suburb of Newburgh, Fife. Acres, 6371. Real property in 1880-81, 10,439. Pop., quoad civilia, 983; quoad sacra, 862. The land includes a rich alluvial tract on the Tay, but is mostly a fine diversity of hill and dale. Chief features are Clatchard Crag, Norman's Law, Inchrye House, Lindores House, loch, and village, and vestiges of a castle said to have belonged to Macduff. The church contains about 500 sittings, and the public school has places for 159 scholars.

ABERARDER, glen, with vista view to Benaven, off left side of the Dee, between Balmoral and Castleton, Aberdeenshire.

ABERARDER, place in Daviot parish, Inverness-shire. It has a post office under Inverness.

ABERARGIE, village, \\ miles west of AberMUnr, Perthshire. It has a post office under Bridge of Earn.

ABERCHALDER, seat, at foot of Loch Oich. Great Glen, Inverness-shire. Prince Charles Edward concentrated his forces here at the commencement of the rebellion in 1745.

ABERCHIRDER, town, 9 miles south-by-west of Banff. It has a post office, with money order and telegraph departments, under Banff; a banking office; Established, Free, United Presbyterian, Baptist, Episcopalian, and Roman Catholic churches, and 2 public schools. Its Free church originated in the Marnoch contest, one of the sharpest which led to the Disruption, and is large and handsome. Pop. of the town, 1358.

ABERCORN, parish, extending from Firth of Forth to vicinity of Winchburgh railway station, Linlithgowshire. Post town, South Queensferry. Acres, 4500. Real property in 1880-81, 10,173. Pop. 856. The surface is finely diversified, and both contains and commands delightful views, yet rises nowhere higher than 350 feet above sea-level. Chief features are Hopetoun House and Binns House, seats of the Earl of Hopetoun and Sir Robert Dalyell, Bart. Interesting spots are sites of a Culdee establishment and a famous ancient castle ; and a notable estate is one which passed from the Hamil-tons, but continues to give their descendant the titles of Earl, Marquis, and Duke of Abercorn. The churches are Established and Free; and there are 2 public schools with about 111 scholars.

ABERCROMBIE, parish, containing St. Monance town, on south-east coast of Fife. Acres, 1203. Real property in 1880-81, 6073. Pop. 2054. The beach is low and rocky, the land thence rises very abruptly, and the interior has undulations, but is mainly flat. The churches are Established and Free. The public school is partly new, and has about 211 scholars, and it and 3 others have jointly accommodation for 398.

ABERDALGIE, parish, from 1^ to 4J miles west of Bridge of Earn, Perthshire. It has a post office under Perth. Acres, 4165. Real property in 1880-81, 4657. Pop. 297. The surface rises from the Earn to the northern boundary, presents a luxuriant appearance, and commands picturesque views. The chief feature is Dupplin Castle, the seat of the Earl of Kinnoul. The public school has about 38 scholars.

ABERDEEN, city on the south-east verge of Aberdeenshire, at mouth of river Dee, 90 miles north-east-by-north of Perth. It ranks as a royal and parliamentary burgh, a place of sheriff and justiciary courts, a university town, a seat of manufacture, and a head port. It appears first on record in 1179 ; it was enthralled by the English from 1296 till 1308, but expeUed them under the war-cry, ' Bon-accord ' ; it was destroyed by them in 1336, but was soon rebuilt, and then called New Aberdeen. It figured much in subsequent national events,both political and military, and it gives the title of eai-1 to a branch of the family of Gordon. Its site includes rising ground and dell, giving diversity to the street alignments; and its building material is granite, occasioning it to be called the Granite City. Its thorough-fares, till near the end of last century, were narrow, dense, and ill-built; but they have from time to time, down to 1881, been so improved and extended as to make it one of the finest cities in Great Britain. Castle Street, in its centre, is a large, grandly-edificed rectangle. Union Street, extending thence about f mile to the west-south-west, is both remarkably well-edificed in itself, and commands striking views of other parts of the city. King Street, extending northward from Castle Street, is little inferior to Union Street ; and a number of other thorough-fares are straight, spacious, and pleasing. The Municipal and County Buildings, in Castle Street, were erected in 1865-69, at a cost of about 60,000. The post office, at foot of Market Street, was erected in 1872-76, at a cost of about 16,000. The North of Scotland Bank, at south-west corner of Queen Street, was erected in 1839, at a cost of 14,000. The Music Hall buildings, in Union Street, were completed about 1855, at a cost of 16,500. The theatre, in Guild Street, was erected in 1872, at a cost of nearly 8000. The Market Cross,in Castle Street, a singularly complex ornamental structure, was erected in 1686, and reconstructed in 1842. A bridge, spanning a ravine in the line of Union Street, was erected at a cost of 13,342. Victoria Bridge, across the Dee, in line of Market Street, was completed in 1881, at a cost of fully 20,000. The Prince Consort's Monument, at south end of Union Terrace, was inaugurated in 1863. The Duke of Gordon's Monument, in Castle Street, is a colossal granite statue. Sir William Wallace's Monument, in front of Union Terrace, was projected in February 1880. St. Nicholas Established church, oft' Union Street, was originally a cathedral-like, cruciform edifice, suffered partial destruction by fire in 1874, and was restored at a cost of about 15,000, before the end of 1878. The North Established church, in Queen Street, was erected in 1826, at a cost of 10,500. The East and West Free churches, in Belmont Street, form one imposing cruciform edifice. Other Presbyterian churches, Established, Free, and United Presbyterian, are modern and good. The Congregational chapel, in Shiprow, was erected in 1867, at a cost of more than 5500. St. Andrew's Episcopalian church, in King Street, was erected in 1817, at a cost of 8000, and acquired a new chancel in 1880. St. Mary's Episcopalian church, in Garden Place, was erected about 1864. The Roman Catholic church, in Huntly Street, was erected in 1860, and contains 1200 sittings. Maris-chal College, in Broad Street, was erected in 1837-41 ; occupies the site of previous buildings dating from old times ; and in 1860 was constituted one university with King's College in Old Aberdeen. The Old Academy, long famous for producing distinguished scholars, was voted in May 1880 to be converted into a museum of science and art. A public school in Commerce Street, one of 5 new schools provided by the burgh school board, was built in 1876, at a cost of about 4500. The Infirmary, at Woolmanhill, was erected in 1840, at a cost of about 17,000. The Lunatic Asylum, in the north-western outskirts, was completed in 1819, at a cost of about 20,000. A public park at Allen-vale was begun to be formed in August 1881, and comprises about 47 acres. The city has a head post office with all departments ; 6 sub-offices, with each a money order department ; railway communication northward, north-westward, westward, and southward ; 2 head banking offices, 6 branch banking offices, and numerous hotels ; contains 12 Established churches, 19 Free churches, 6 United Presbyterian, 5 Congregational, 2 Evangelical Union, 3 Baptist, 5 Episcopalian, and 6 of other denominations ; had formerly 90 schools for 12,708 scholars, and now has 86 schools for 14,677 ; publishes 3 daily newspapers and 5 weekly; carries on large manufactures of linens, woollens, and cottons, and much business in iron works, breweries, distilleries, granite polishing works, shipbuilding yards, and other establishments; and conducts extensive export of its own produce, and of grain and fish. Its harbour lies within the Dee's mouth, comprehends an elaborate, series of artificial works, cost long ago about 500,000, and was designed in 1876, and recommended again near the end of 1880, to undergo further extension. The vessels belonging to the port at end of 1879 were 178 sailing vessels, of 98,763 tons, and 45 steam vessels, of 20,421 tons ; and the arrivals in that year were 2030 British vessels, of 486,581 tons, and 143 foreign vessels, of 34,566 tons ; the departures, 1985 British vessels, of 479,218 tons, and 137 foreign vessels, of 33,175 tons. The parliamentary burgh sends 1 member to Parliament, and the university unites with Glasgow University in sending another. Real property of the burgh in 1880-81, 429,267. Pop. in 1881, 105,003. 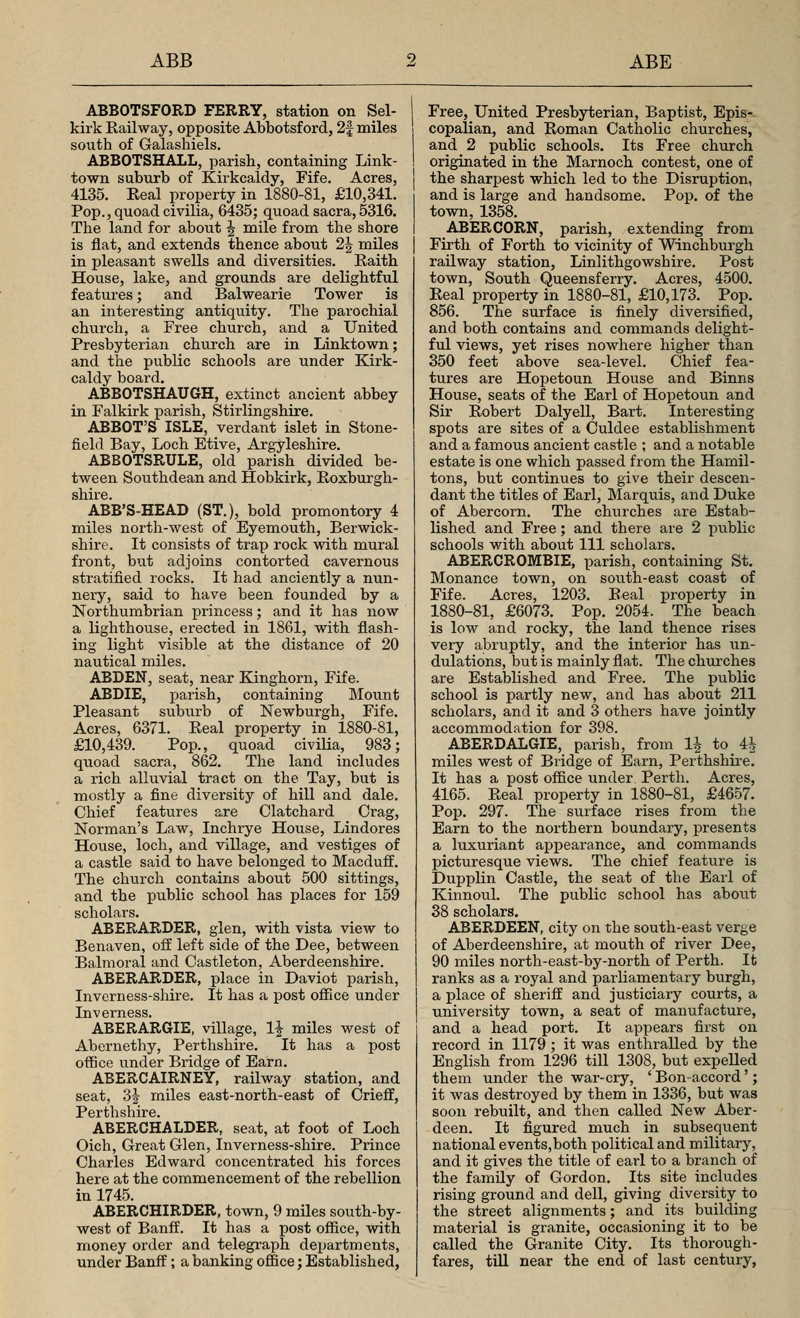