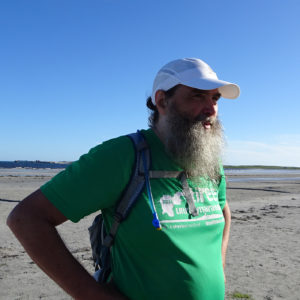 Yesterday I completed the Tiree Ultramarathon, I think my sixth since they began in 2014. As always a wonderful day and a little easier than last year. This is always a high spot in the year for me, and also corresponds to the academic year change, so a good point to reflect on the year past and year ahead.  Lots of things including changing job role, books published and in preparation, conferences coming to Wales … and another short walk …

Next week there will be a Tiree Tech Wave, the first since Covid struck. Really exciting to be doing this again, with a big group coming from Edinburgh University, who are particularly interested in co-design with communities.

Aside: I nearly wrote “the first post-Covid Tiree Tech Wave”, but I am very aware that for many the impact of Covid is not past: those with long Covid, immunocompromised people who are in almost as much risk now as at the peak of the pandemic, and patients in hospital where Covid adds considerably to mortality.

Albrecht Schmidt from Ludwig-Maximilians-Universität München was here again for the Ultra. He’s been several times after first coming the year of 40 mile an hour winds and rain all day … he is built of stern stuff.  Happily, yesterday was a little more mixed, wind and driving rain in the morning and glorious sunshine from noon onwards … a typical Tiree day 😊

We have hatched a plan to have Tiree Tech Wave next year immediately after the Ultra. There are a number of people in the CHI research community interested in technology related to outdoors, exercise and well-being, so hoping to have that as a theme and perhaps attract a few of the CHI folk to the Ultra too.

My job roles have changed over the summer.

I’ve further reduced my hours as Director of the Computational Foundry to 50%. University reorganisation at Swansea over the last couple of years has created a School of Mathematics and Computer Science, which means that some of my activities helping to foster research collaboration between CS and Maths falls more within the School role. So, this seemed a good point to scale back and focus more on cross-University digital themes.

However, I will not be idle! I’ve also started a new PT role as Professorial Fellow at Cardiff Metropolitan University. I have been a visiting professor at the Cardiff School of Art and Design for nearly 10 years, so this is partly building on many of the existing contacts I have there. However, my new role is cross-university, seeking to encourage and grow research across all subject areas. I’ve always struggled to fit within traditional disciplinary boundaries, so very much looking forward to this.

This summer has also seen the publication of “TouchIT: Understanding Design in a Physical-Digital World“. Steve, Devina, Jo and I first conceived this when we were working together on the DePTH project, which ran from 2007 to 2009 as part of the AHRC/EPSRC funded Designing for the 21st Century Initiative. The first parts were written in 2008 and 2009 during my sabbatical year when I first moved to Tiree and Steve was our first visitor. But then busyness of life took over until another spurt in 2017 and then much finishing off and updating. However now it is at long last in print!

Hopefully not so long in the process, three more books are due to be published in this coming year, all around an AI theme. The first is a second edition of the “Introduction to Artificial Intelligence” textbook that Janet Finlay and I wrote way back in 1996. This has stayed in print and even been translated into Japanese. For many years the fundamentals of AI only changed slowly – the long ‘AI winter’. However, over recent years things have changed rapidly, not least driven by massive increases in computational capacity and availability of data; so it seemed like a suitable time to revisit this. Janet’s world is now all about dogs, so I’ve taken up the baton. Writing the new chapters has been easy. The editing making this flow as a single volume has been far more challenging, but after a focused writing week in August, it feels as though I’ve broken the back of it.

In addition, there are two smaller volumes in preparation as part of the Routledge and CRC AI for Everything series. One is with Clara Crivellaro on “AI for Social Justice“, the other a sole-authored “AI for Human–Computer Interaction”.

All of these were promised in 2020 early in the first Covid lockdown, when I was (rather guiltily) finding the time tremendously productive. However, when the patterns of meetings started to return to normal (albeit via Zoom), things slowed down somewhat … but now I think (hope!) all on track 😊

Welcoming you to Wales

In 2023 I’m chairing and co-chairing two conferences in Swansea. In June, ACM Engineering Interactive Computer Systems (EICS 2023) and in September the European Conference on Cognitive Ergonomics (web site to come, but here is ECCE 2022). We also plan to have a Techwave Cymru in March. So I’m looking forward to seeing lots of people in Wales.

Alan’s on the road again

Nearly ten years ago, in 2013, I walked around Wales, a personal journey and research expedition. I always assumed I would do ‘something else’, but time and life took over. Now, the tenth anniversary is upon me and it feels time do something to mark it.

I’ve always meant to edit the day-by-day blogs into a book, but that certainly won’t happen next year. I will do some work on the dataset of biodata, GPS, text and images that has been used in a few projects and is still a unique data set, including, I believe, still the largest single ECG trace in the public domain.

However, I will do ‘something else’.

When walking around the land and ocean boundaries of Wales, I was always aware that while in some sense this ‘encompassed’ the country, it was also the edge, the outside. To be a walker is to be a voyeur, catching glimpses, but never part of what you see.  I started then to think of a different journey, to the heart of Wales, which for me, being born and brought up in Cardiff, is the coal valleys stretching northwards and outwards. The images of coal blackened miners faces and the white crosses on the green hillside after Aberfan are etched into my own conception of Wales.

So, there will be an expedition, or rather as series of expeditions, walking up and down the valleys, meeting communities, businesses, schools and individuals.

Do you know places or people I should meet?

Do you want to join me to show me places you know or to explore new places?