It’s a dark night and you’ve been working late in the office. It is time to go home and you are about to make your way through the dimly lit corridors to the entrance. You are alone in the building … but are you? Happily the building is equipped with an alien presence detector. A comprehensive system of digital displays line the corridors; they are used for signage and messages during the day, but at night they have a different purpose.

You go to the unit outside your office and look at the display.

As well as a touchscreen, each device has a camera and microphone which can be used to sense whether there are people in the corridors. Each person is then shown on the building plan on the display, so that you can instantly see if there are others about. However, your own position is not displayed on the map. You are wearing a small security badge with an infrared LED that is detected by the camera system. Anyone with a badge is hidden on the display, only alien presence remains.

You can see an alien presence marked near the entrance to the building. Is it safe to go out?

The alien presence detector also has a video option that let’s you view the video from the cameras on the devices. You look at the camera near the entrance way.

Maybe it is a colleague who has just forgotten their badge … but maybe is is an intruder and you need to call security. 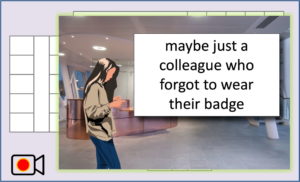 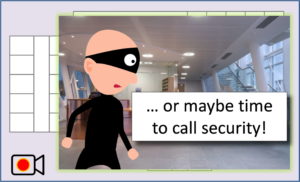 But if you can use the system to see the intruder, maybe they can do the same to find you?

The alien presence detector could make you authenticate, but at the times you need it you really want instant access with minimum fuss. So the basic system is available everywhere without authentication, the intruder can use it as well as you.

But recall, if you are wearing your security badge you are not shown on the map, so the intruder cannot spot you this way.

Perhaps the intruder will scan the corridors using the video feature to see who is about. Will you be visible to the camera system? No, just as the map removes the markers for anyone wearing a badge, the cameras also digitally remove their images using past footage and fill-in-the-gaps algorithms.

If you are wearing a badge you are invisible, only an alien presence can be seen.

With the alien presence detector at hand, you feel safe.

The idea for the Alien Presence Detector dates back to the mid-2000s. Hermes II, a system of small door-side screens had been placed around InfoLab21 in Lancaster University which was the home of the computing department. In the old building we had an earlier version of Hermes, that was built using adapted PDAs, each with a small screen and stylus interactions. This was used as a form of digital Post-it note.

The new system used bespoke units, each with a larger screen and also a camera and microphone which could be used for video/audio messages as well as hand-written notes. This pervasive network of devices was an unusual, perhaps unique, research platform at the time, so we were looking for other research opportunities for this flexible infrastructure.

The screens lent themselves to various form of digital signage, including navigation for visitors.

But we could we do more with the pervasive camera and microphone array. The potential as a sensing platform seemed too good to miss. Several of our colleagues were already nervous of the idea of having cameras everywhere, even if they were only active when leaving a message, and even more worried about microphones potentially eavesdropping. So anything we considered needed to respect privacy and not be part of the growing culture of surveillance.

One option we considered was to use local processing on both cameras and microphones to detect overall ambient levels of activity and movement, perhaps creating a heat map of the building. This kind of data could be used to connect with theoretical work on human flows and architecture such as space syntax. Furthermore, visual-flow algorithms could give data on general directions and speeds of movement within the building without anything being detected or stored that related to individuals.

Another idea was inspired by Olivetti Active Badges. This was a system developed in the late 1980s / early 1990s by Olivetti Research Labs Cambridge (later AT&T Labs) and deployed in a number of University and commercial research labs including Xerox EuropPARC. The system used small badges with an infra-red beacon that could be detected by a network of special sensors placed around a building.

This could then be used to hep find colleagues, or as a means of authentication for other system or to access buildings. At EuroPARC the system was used to create digital diaries in the Pepys system. If you spent time in the same location as someone else, this would be recorded as a meeting. This was especially useful in a research environment where meetings might be spontaneous while having coffee, or passing in the corridor.

We had been working on the Firefly system of intelligent lighting, which used codes flashed by visible LEDs to located lights in 3D. Infra-red LEDs show up very well on digital cameras, so we realised it would be possible to easily deploy a system like Active Badges, but without the need to install any additional sensor infrastructure within the building beyond the existing Hermes II units.

This would enable us to replicate the Active Badge system and perhaps do other things with the badges. However, the badge system itself could be seen as a form of surveillance. Indeed, in the deployment in Xerox EuroPARC Cambridge, they found tat some people would use the badges to enter the building and then leave them on their desk for the rest of the day so that they were not tracked.

It was then we realised that by combining passive digital detection using the camera network and active digital detection using badges, we could create a system that removed you form the displays in you wore the badges. It would still be possible, if desired, to keep a secure log of identified persons, or for people to choose when they wanted to appear, but basically we could turn the idea of Active Badges on its head making those who wore the badge invisible.

The idea of the Alien Presence Detector was born!

For various reasons, we never progressed this beyond the concept stage, but it would now be much easier to recreate using Pi-Zero or similar off-the-shelf devices.