The South African lottery is facing suspicion of nefarious practice after the winning numbers was six consecutive numbers: 5, 6, 7, 8, 9, 10

Given 50 numbers to choose from this seems extremely odd … or is it? 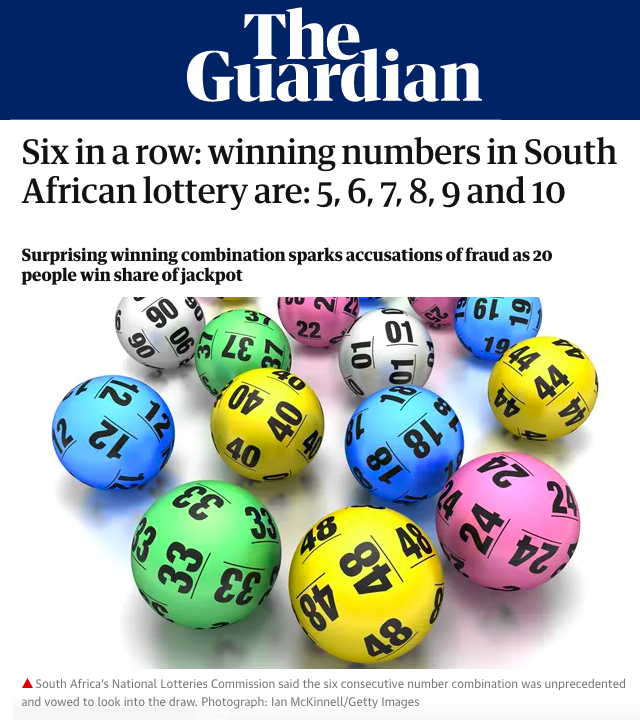 In fact, I describe a very similar surprising situation in my book Statistics for HCI: Making Sense of Quantitative Data, and in the accompanying video “… or worse“.

In the video I had three cards in a row whilst playing a game of patience.  At first I’d thought I’d not shuffled the cards properly, but then realised it was not nearly as unlikely as I’d first thought.

When we see something surprising and work out the odds of it happening it might at first seem incredibly unlikely.  However, this is an example of sampling bias, we tend to notice more unusual outcomes, and so not surprisingly they are the more unlikely ones.

Whenever we see an apparently unlikely event like this we have to ask two questions:

However, looking at question 1, there are 44 different start positions, so that means the odds of getting a consecutive sequence are 22 million / 44, that is about one in half a million.  Still pretty surprising!

Turning to question 2, the South African Lotto has been running since 2000 with draws twice weekly for most of that time.  That is there have been around 2000 draws of the Lotto, so there is about a one in 250 chance (1/2 million / 2000) that one of those would be a consecutive sequence.

Unlikely still, but a lot less unlikely than the immediate one in 22 million.

To be honest, if I were the lottery organiser I would still double check, if only to reassure my punters, but it is not nearly as astounding as it first appears.

On a serious note, if you are doing your own experiments, perhaps you can start to see why there are worries about multiple tests, publication bias and HARKing (hypothesis after the results are known).