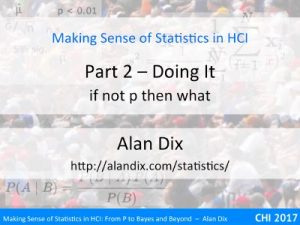 In this part we will look at the major kinds of statistical analysis methods:

None of these is a magic bullet; all need care and a level of statistical understanding to apply.

We will discuss how these are related including the relationship between ‘likelihood’ in hypothesis testing and conditional probability as used in Bayesian analysis. There are common issues including the need to clearly report numbers and tests/distributions used. avoiding cherry picking, dealing with outliers, non-independent effects and correlated features. However, there are also specific issues for each method.

In Bayesian statistics different problems arise including the need to be able to decide in a robust and defensible manner what are the expected prior probabilities of different hypothesis before an experiment; the closeness of replication; and the danger of common causes leading to inflated probability estimates due to a single initial fluke event or optimistic prior.

Crucially, while all methods have problems that need to be avoided, not using statistics at all can be far worse.