I’ve just spent most of the last week in Edinburgh.  This was mainly for a one day update meeting for the projects in the Digital R&D Fund for Arts and Culture in Scotland, who funded the An Iodhlann mobile app Frasan.  However, such are the logistics of Island life that I spent four days on the road, but, in the process, saw friends and family and came back with a three-foot long box. 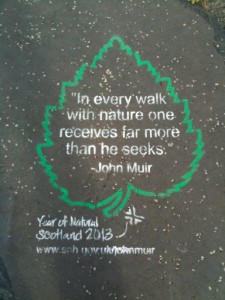 The previous meeting had been between the March Tiree Tech Wave and Miriam’s wedding, so I ended up taking a plane on the day, taxi across from Glasgow to Edinburgh1 and arriving for the last two hours of the afternoon.  This time I was a little more leisurely!  I didn’t want to do another guerrilla attendance, but weather was looking uncertain for Wednesday, and so I ended up flying over on Tuesday and back on Friday, all booked on Monday as I’d missed the critical emails earlier.

However, I did make the most of the journey.

On Tuesday I stopped off at Haymarket and went to Maplin for an LED sign.  I’d tried to get a reconditioned unit by mail order, but it had got lost in the post, by which time they had run out of online stocks, but did have them in store.  The sign is for experimenting with digital signage at Tiree Tech Wave.  We have pico projectors for hi-res stuff, but this means we can also play with simpler, daytime-visible signage.

I also got a chance to meet with Owen and Natasha, my nephew and … whatever you call the person married to a nephew … niece-in-law?  They both work for Scottish Government, and kept very busy not least with the additional load in the run-up to the independence referendum next year.  Chatting to them I realise that the Scottish Government already does so much, and whatever the results of the referendum certainly the role of Scottish and Welsh Governments will grow in coming years.

After the debacle of the electoral reform referendum, which was fought on a “do you really want more Clegg?” basis, I am just hoping that the debate over Scottish independence is more reasoned, but, sadly, so far disinformation and prevarication are more common than plain speaking.  I am appalled at the constant stream of news headlines, that warn of some economic post-independence catastrophe, only to find, buried on the past lines “according to …” some anti-independence spokesperson or think-tank. 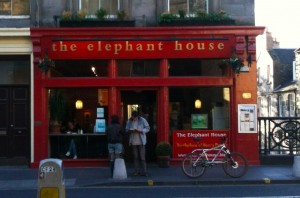 My recent favourite was the Times article prophesying the collapse of company pension funds.  The full story hinged around the use of Scottish Limited Partnerships, SLPs, a special legal instrument, and would only cause problems for south-of-the-border companies and then only if a post-independence Westminster, in a fit of pique, chose to damage its own industry.

On Wednesday I had dinner with Sandra Cairncross and Tom McEwan and later Tom and I met David Benyon at the World’s End.  So an evening of discussing higher education, the transformation of research into the digital economy and the state of the Scottish brewing and distilling industry (the last using empirical methods).

The Nesta meeting was a joy as always.  Good to meet old faces from Nesta, the other arts and culture projects and CReATes the research team.  It was especially good to meet Lorna Edwards who has taken over from Gillian Easson as Programme Manager for Nesta in Scotland (three weeks into the job and learning fast!) and also to meet Louisa from CReATes who is going to be at the next Tiree Tech Wave.  It was a wonderfully open environment discussing problems as well as successes as the ultimate aim of Nesta is the learning of how collaborations work between arts/culture and technology partners. 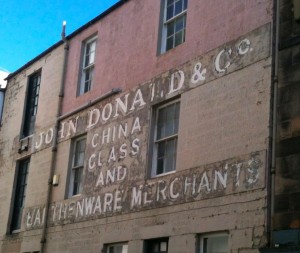 And finally, defining images of Edinburgh, a city that seems hell bent on becoming a pastiche of itself, and yet failing utterly to bury the grey-sooted round-towered tenements and volcanic remains that rise above the river-like flow of clan-less tartan and plastic claymores.

A shop window: “sporrans half price”.

A bagpipe busker playing “The Wheels on the Bus”.

A grimy-windowed, grim-painted workshop where bagpipes are still fashioned by skill, sweat and oily wood shavings.