I’ve been (belatedly) reading Adam Greenfield‘s Everyware: The Dawning Age of Ubiquitous Computing. By ‘everywhere’ he means the pervasive insinuation of inter-connected computation into all aspects of our lives — ubiquitous/pervasive computing but seen in terms of lives not artefacts. Published in 2006, and so I guess written in 2004 or 2005, Adam confidently predicts that everywhere technology will have  “significant and meaningful impact on the way you live your life and will do so before the first decade of the twenty-first century is out“, but one month into 2010 and I’ve not really noticed yet. I am not one of those people who fill their house with gadgets, so I guess unlikely to be an early adopter of ‘everywhere’, but even in the most techno-loving house at best I’ve seen the HiFi controlled through an iPhone.

Devices are clearly everywhere, but the connections between them seem infrequent and poor.

Why is ubiquitous technology still so … well un-ubiquitous?

END_OF_DOCUMENT_TOKEN_TO_BE_REPLACED

… and in the afternoon, the mountains of Jura ethereal over the sea

While putting away the cutlery I noticed that I always do it one kind at a time: all the knives, then all the forks, etc. While this may simply be a sign of an obsessive personality, I realised there was a general psychological principle at work here.

We often make the distinction between recognition and recall and know, as interface designers, that the former is easier, especially for infrequently used features, e.g. menus rather than commands.

In the cutlery tray task the trade-off is between a classification task “here is an item what kind is it?” versus a visual recognition one “where is the next knife”. The former requires a level of mental processing and is subject to Hick’s law, whereas the latter depends purely on lower level visual processing, a pop-out effect.

I am wondering whether this has user interface equivalents. I am thinking about times when one is sorting things: bookmarks, photos, even my own snip!t. Sometimes you work by classification: select an item, then choose where to put it; for others you choose a category (or an album) and then select what to put in it. Here the ‘recognition’ task is more complex and not just visual, but I wonder if the same principle applies? 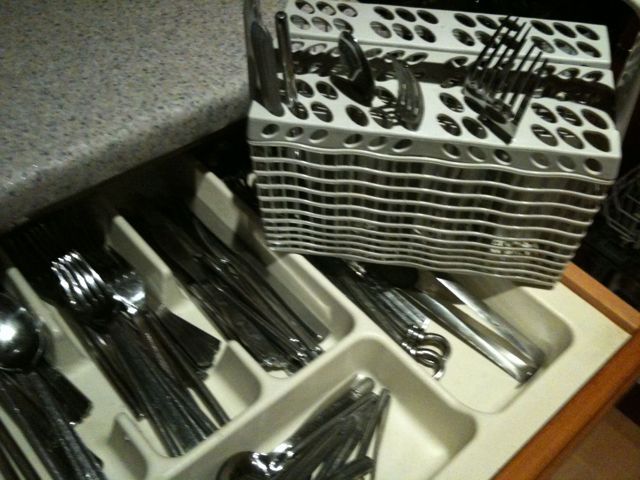 Just been out to see the wind turbine at Ruaig.  They were delivering the parts when I was on the Island for a few days in November, but first time I’ve seen it close up since they put it together. Like some Biblical locust swarm, every attempt to do anything is thwarted by the dead weight of innumerable bugs! This time I was trying … and failing … to upload a Word file into Google docs. I uploaded the docx file and it said the file was unreadable, tried saving it as .doc, and when that failed created an rtf file. Amazingly from a 1 Meg word file the rtf was 66 Meg, but very very slowly Google docs did upload the file and when it was eventually all uploaded …

To be fair the same document imports pretty badly into Pages (all the headings disappear).  I think this is because it is originally a 2003 Word file and gets corrupted when the new Word reads it.

Now I have griped before about backward compatibility issues for Word, and in general about lack of robustness in many leading products, and to add to my woes, for the last month or so (I guess after a software update) Word has decided not to show its formatting menus on an opened document unless I first hide them, then show them, and then maximise the window. Mostly these things are annoying, sometimes really block work, and always waste time and destroy the flow of work.

However, rather than grousing once again (well I already have a bit), I am trying to make sense of this.  For some time it has become apparent that software is fundamentally breaking down, in that with every new version there is minimal new useful functionality, but more bugs.  This may be simply issues of scale, of the training of programmers, or of the nature of development processes.  Indeed in the talk I gave a bit over a  year ago to PPIG, “as we may code“, I noted that coding in th 21st Century seems to be radically different, more about finding tricks and community know-how and less about problem solving.

Whatever the reason, I don’t think the Biblical plague of bugs is simply due to laziness or indifference on the part of large vendors such as  Microsoft and Adobe, but is symptomatic of a deeper crisis in software development, certainly where there is a significant user interface.

Maybe this is simply an inevitable consequence of scale, but more optimistically I wonder if there are new ways of coding, new paradigms or new architectural models.  Can 2010 be the decade when software is reborn?