I’m always on the lookout for interesting things to add to the Tiree Tech Wave boxes to join Arduinos, Pis, conductive fabric, Lilypad, Lego Technic, etc., and I had  chance to play with a new bit of kit at Christmas ready for the next TTW in March.

Last year I saw a Kickstarter campaign for MicroView by GeekAmmo, tiny ‘chip-sized’ Arduinos with a built in OLED display.  So I ordered a ‘Learning Kit’ for Tiree Tech Wave, which includes two MicroViews and various components for starter projects.

Initially, the MicroView was ahead of schedule and I hoped they would arrive in time for TTW 8 last October, but they hit a snag in the summer.  The MicroViews are manufactured by Sparkfun who are very experienced in the maker space, but the production volume was larger than they were previously used to and a fault (missing boot loader) was missed by the test regime, leading to several thousands of faulty units being delivered.

Things go wrong and it was impressive to see the way both GeekAmmo and Sparkfun responded to the fault, analysed their quality processes and, particularly important, keeping everyone informed.

So, no MicroViews for TTW8, but they arrived before Christmas, and so one afternoon over Christmas I had a play 🙂 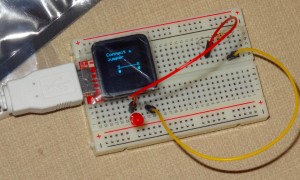 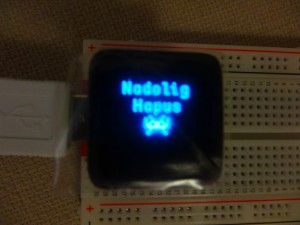 When you power up the MicroView (I used a USB from the computer as power source, but it can be battery powered also) the OLED screen first of all shows a welcome and then takes you through a mini tutorial, connecting up jumpers on the breadboard, and culminating with a flashing LED.  It is amazing that you can do a full tutorial, even a starter one, on a 64×48 OLED!

The results of my first effort are on the left above 🙂

Can you think of any projects for two tiny Ardunos?  Come to Tiree Tech Wave in March and have a go!