Sometimes it feels like the wind is always against you. 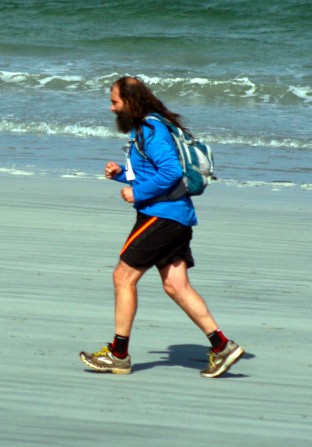 I’ve just been out for a run.  It is not terribly windy today by Tiree standards, the Met Office reports the speed at 18mph from the north west, but it was enough to feel as I ran and certainly the gritted teeth of cyclists going past the window suggests is plenty windy for them.

As I was running I remembered a question that Will Wright once asked me, “why does it feel as if the wind is always against you?”

Now Will competes in Iron Man events, and is behind Tiree Fitness, which organises island keep fit activities, and the annual Tiree 10k & half marathon and Ultra-Marathon (that I’m training for now).  In other words Will is in a different league to me … but still he feels the wind!

Will was asking about cycling rather than running, and I suspect that the main effect of a head wind for a runner is simply the way it knocks the breath out of you, rather than actual wind resistance.  That is, as most things in exercise, the full story is a mixture of physiology, psychology and physics.

For this post I’ll stick to the ‘easy’ cases when the wind is dead in front or behind you.  I’ll leave sidewinds to a second post as the physics for this is a little more complicated, and the answer somewhat more surprising.

In fact today I ran to and fro along the same road, although its angle to the wind varied.  For the purposes of this post I’ll imagine straightening it more, and having it face directly along the direction of the wind, so that running or cycling one way the wind is directly behind you and in the other the wind is directly in front.

running with the wind

To make the sums easier I’ll make the wind speed 15 mph and have me run at 5mph.

On the outward leg the wind is behind me.  I am running at 5mph, the wind is coming at 15mp, so if I had a little wind gauge as I ran it would register a 10mph tail wind.

When I turn into the wind I am now running at 5mph into a 15mph head wind, so the apparent wind speed for me is 20mph.

So half the time the wind is helping me to the tune of 10mph, half the time resisting me by 20mph, so surely that averages out as 5mph resistance for the whole journey, the same as if I was just running at 5mph on a  still day?

Unfortunately wind resistance does not average quite like that!

Wind resistance increases with the square of your speed.  So a 10mph tail wind creates 100 units of force to help you, whereas a 20mph head wind resists you with 400 units of force, four times as much.  That is, it is like one person pushing you from behind for half the course, but four people holding you back on the other half. 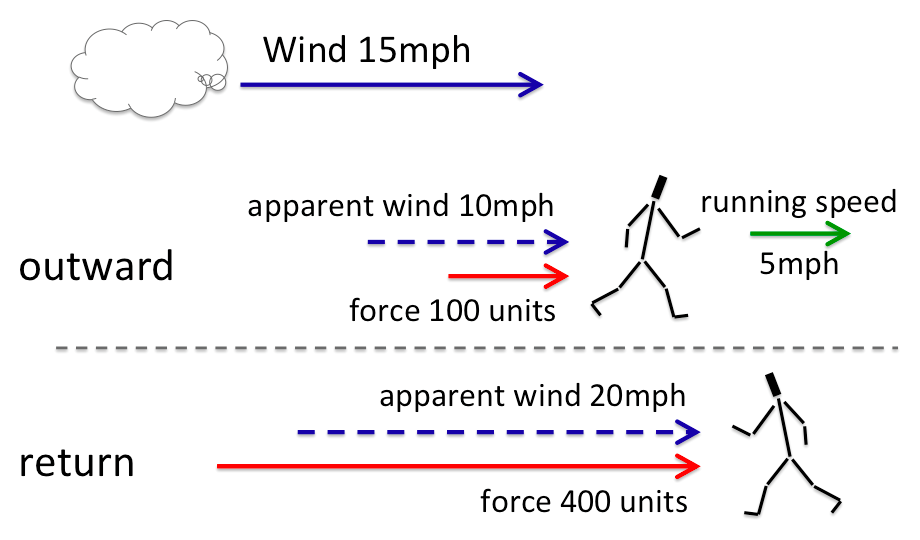 It is this force, the squared speed, that it makes more sense to average

Compare this to the effects of running on a still day at 5mph.

It really is harder!

In fact, for a runner, wind resistance (physics) is probably not the major effect on speed, and despite the wind my overall time was not significantly slower than on a still day.  The main effects of the wind are probably the ‘knocking the breath out of you’ feeling and the way the head wind affects your stride (physiology).  Of course both of these make you more aware of the times the wind is in your face and hence your perception of how long this is (psychology). 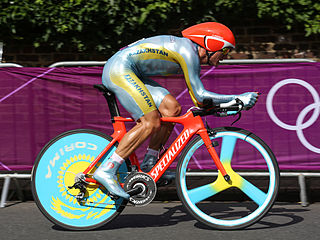 For a cyclist wind resistance is a far more significant issue1.  Think about Olympic sprinters who run upright compared with cyclists who bend low and even wear those Alien-like cycling helmets to reduce drag.

This is partly due to the different physical processes, for example, on bike on a still day, the bike will keep on going forward even if you don’t pedal, whereas if you don’t keep moving your legs while running you get nowhere.

It is also partly due to the different speeds.  Even Usain Bolt only manages a bit over 20mph and that for just 100 metres, and for long-distance runners this drops to around 12 mph.  Equivalent cycling events are twice as fast and even a moderately fit cyclist could compete with Usain Bolt.

So let’s imagine our Tiree cyclist, grimacing as they head into the wind.

I’m going to assume they are cycling at 15mph.

If it were a still day the air resistance would be entirely due to their own forward speed of 15mph, hence (squared remember) 225 units of force against them.

However, with a 15mph wind, when they are cycling with the wind there is no net air flow, the only effort needed to cycle is the internal resistance of chain and gears, and the rubber on the road.  In contrast, when cycling against the wind, total air resistance is equivalent to 30mph. Recalling the squaring rule, that is 900 units of resistance, 4 times as high as on a still day.

Even averaging with the easy leg, you have twice as much effort needed to overcome the air resistance.  No wonder it feels tough! 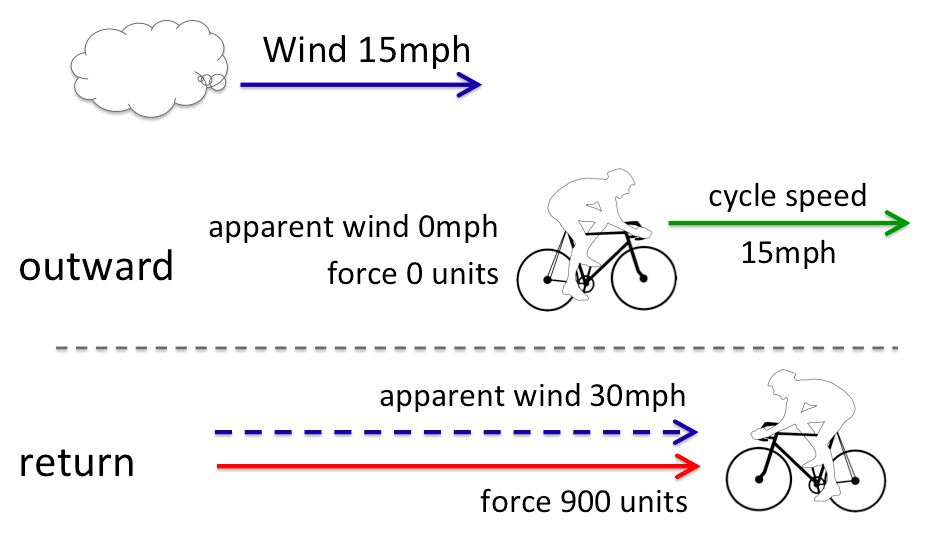 However, that is all assuming you keep a constant speed irrespective of the wind.  In practice you are likely to slow down against a head wind and speed up with a tail wind.  Let’s assume you slow down to 10mph in the head wind and manage a respectable 20mph with the wind behind you.

1 thought on “why is the wind always against you? part 1 – head and tail winds”