The December 12th election saw the most disasterous Labour defeat in nearly a century and the collapse of the ‘red wall’ of Labour heartlands in the North-East. Jeremy Corbyn and John McDonnell are standing down in the New Year, and the vultures are gathering to pick the meagre bones of Corbyn’s political body.

Many Labour canvasers reported that on the doors the problem was four parts Corbyn for every one part Brexit. The message is clear, Corbyn was toxic on the doorstep and Labour needs a change.

But the numbers tell a different story.

Labour’s vote share fell dramatically from the surprise successes of 2017, when Corbyn’s campaign charisma unexpectedly set back Teresa May’s ambition to win the sort of majority that Boris Johnson has today.

But if you look before that to 2015,, the picture is less clear

.Comparing the recent election with 2015, the Labour share of the vote in 2019 is actually higher than its vote share in 2015. Yes, Labour is still performing better under the avowedly socialist Jeremy Corbyn than it did under ‘centrist’ Ed Miliband. 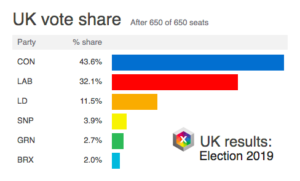 The difference between David Cameron’s small majority and Boris Johnson’s landslide is predominantly about the collapse of the UKIP/Brexit vote, with the hard Leavers exchanging Farage for Johnson. In 2017, Labour took a soft Brexit position, which, while annoying many Corbyn supporters at the time, seemed to hold onto many of the Leave voters who last week voted Conservative in Labour heartlands

Increasing vote share since 2015 is remarkable in the face of long-term excoriating press attacks against Jeremy Corbyn personally and a Conservative Facebook ad campaign that fact checkers rated as 88% false, not forgetting persistent undermining by sections of the Labour party itself.

More crucial is who voted for Labour and Conservative. It has always been the case that voters drift right as they age, often favouring economic security over youthful idealism. However this has dramatically shifted in the last few years. Conservative support in younger age groups has crashed utterly and it is now predominantly a party of the old. The Tory Party has effectively mortgaged its future for current electoral success.

This is evident in the demographics of voting on Dec 12th collected by Lord Ashcroft’s post-vote poll. Labour has a vast lead over Conservative in voters under 45, whereas Conservative vote share, which is over 60% in the over 65’s, shrinks to less than 20% in the under 25s. 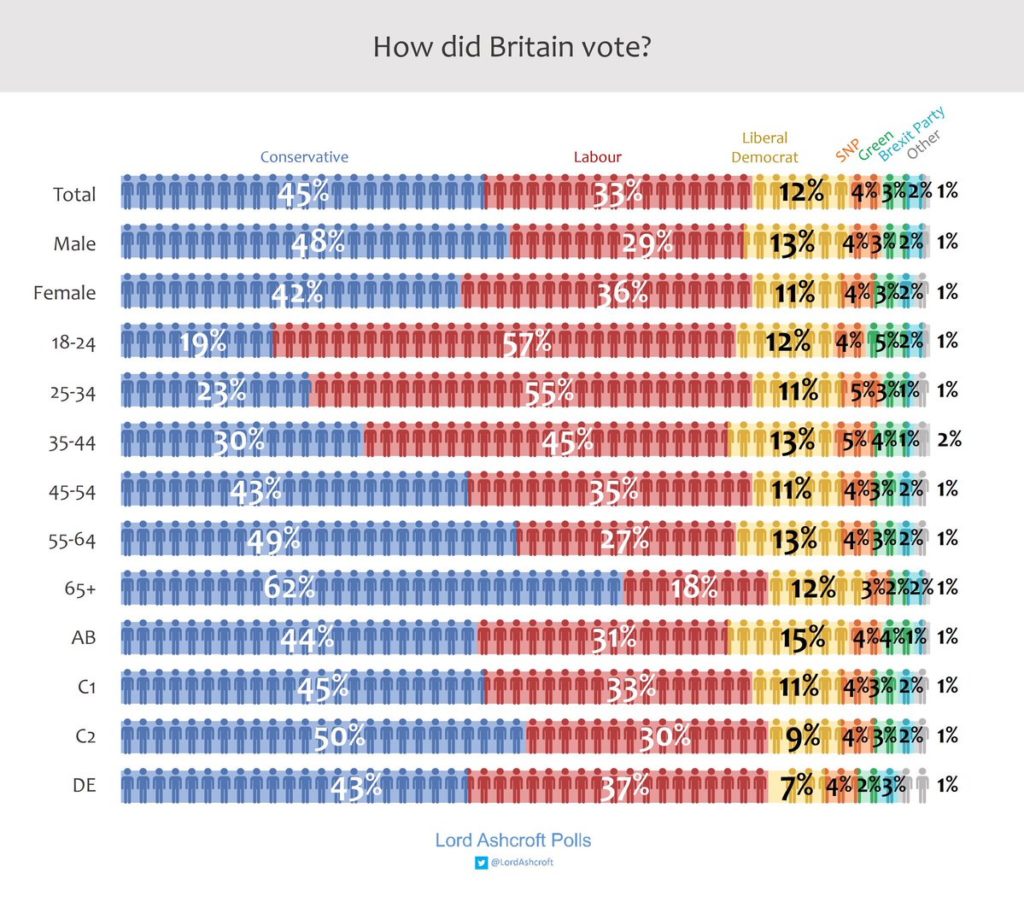 These under 45s have lived entirely under the neoliberal individualism that started with Thatcher and adopted in large part by New Labour and Tory governments since. They have seen it, and rejected it. A generation is growing who are looking beyond themselves, recognising the disastrous impacts of past policies of all governments on the environment and humanity, and believing in the power of society to transform, not just their own lives, but those of the whole nation and world.

As Labour chooses its new leader, it should ponder whether it wants to revert to the old policies and combat the Tories for the votes of the old, or embrace the spirit of hope and change that has galvanised the youth of the country.