I was looking at Coke Cola’s Rugby World Cup site1,

On the all-red web page the tooltip stood out, with the uninformative text, “headimg”. 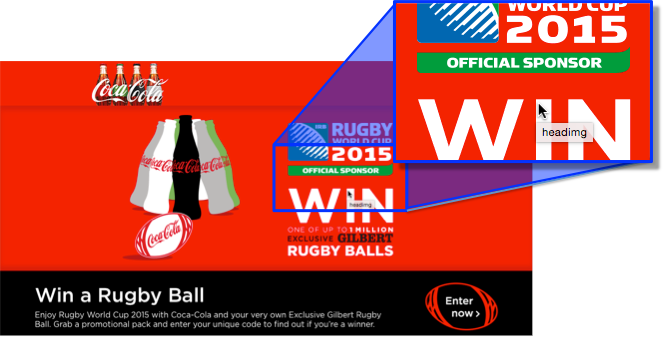 Peeking in the HTML, this is in both the title and alt attributes of the image.

I am guessing that the web designer was aware of the need for an alt tag for accessibility, and may even have had been prompted to fill in the alt tag by the design software (Dreamweaver does this).  However, perhaps they just couldn’t think of an alternative text and so put anything in (although as the image consists of text, this does betray a certain lack of imagination!); they probably planned to come back later to do it properly.

As the micro-site is predominantly targeted at the UK, Coke Cola are legally bound to make it accessible and so may well have run it through WCAG accessibility checking software.  As the alt tag was present it will have passed W3C validation, even though the text is meaningless.  Indeed the web designer might have added the unhelpful text just to get the page to validate.

The eventual page is worse than useless, a blank alt tag would have meant it was just skipped, and at least the text “header image” would have been read as words, whereas “headimg” will be spelt out letter by letter.

Perhaps I am being unfair,  I’m sure many of my own pages are worse than this … but then again I don’t have the budget of Coke Cola!

More seriously there are important lessons for process.  In particular it is very likely that at the point the designer uploads an image they are prompted for the alt tag — this certainly happens with Dreamweaver.  However, at this point your focus is in getting the page looking right as the client looking at the initial designs is unlikely to be using a screen reader.

Good design software should not just prompt for the right information, but at the right time.  It would be far better to make it easy to say “ask me later” and build up a to do list, rather than demand the information when the system wants it, and risk the user entering anything to ‘keep the system quiet’.

I call this the Micawber principle2 and it is a good general principle for any notifications requiring user action.  Always allow the user to put things off, but also have the application keep track of pending work, and then make it easy for the user see what needs to be done at a more suitable time.