It is wonderful to see the conflict over the St Paul’s protest camp resolved at last, but I am left with the sad image of many in the City gloating over this dispute. 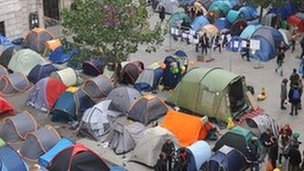 I usually find that incompetence and coincidence are better explanations than intrigue and conspiracy, but one wonders here whether there has not been some careful PR management in the background.  Certainly, the effect of the last weeks has been to divert the attention of media and public away from the real issues of the protest: the contrast between growing poverty in the country and increasing wealth in the finance industry, so that even the news of obscene corporate pay rises during the period was sidelined.

Perhaps more significant in the long term has been the weakening of the position of St Paul’s staff who have often been a gentle but persistent critic of the City, long before the protesters camped and will continue to be long after the camp is dissolved and they return to their normal lives or the next cause.

Jesus said “be as wise as serpents, yet harmless as the dove“, but it seems this time the real serpents have won on wisdom.  I just hope that during the coming months the spotlight can shift to where it belongs, and public and press focus on the increasing injustice and disparity not just in the City of London, but across the country and world.