In  just over a week I’m going to be cycling the coast-to-coast route, from Maryport on the west coast of Cumbria to Tynemouth on the east coast of Northumbria, 140 miles across the Pennines, the backbone of England.

The C2C ride is part of Miriam’s preparation for her 400km cycle ride in Kenya next February (see her blog “BICYCLE, BICYCLE, BICYCLE (I want to ride my…)“), organised by Women V Cancer, in support of several women’s cancer charities. During the Kenya ride Miriam will be doing a gruelling 50 miles a day in summer heat and on not-so-smooth roads, compared to just 35 miles a day on the C2C.  Janet Finlay, Rachel Cowgill and I are joining Miriam on the C2C, and Miriam, Janet and Rachel recently had their own pre-C2C training weekend down in the hills north of Cardiff, up near Aberfan (site of the 1966 disaster, which I posted about a few months ago).

In principle this should be a leisurely ride, we are doing it in four days, some people manage it in three or even two.  However, I’d not been on a bike for ten years before last summer, and since June have been travelling continuously and consequentially only stepped onto the bike four times — so not a lot of practice.  Furthermore, Tiree does not offer a lot of practice for cross-mountain cycling … the last time I cycled up a hill was 1994!  So, Alston Moor and the Pennines may be a bit of a challenge :-/

I’m not doing any sponsorship individually, but if you would like to support me and my sore bottom do add a few pounds on Miriam’s JustGiving page for Kenya and pop in the comments box that it is for me on the C2C.

After too many years I eventually read Richard Llewellyn’s “How Green Was My Valley“, which tells the story of growing up in a South Wales valley at the end of the 19th century.  I vaguely recall seeing the film of the book on the TV one Sunday afternoon as a small child.

You can read the book as a social commentary of a time past, or as a coming of age novel set around with stories of strikes and singing, madness and joy, requited and unrequited loves.   But above all it is a book of poetry, not in the sense of verse, but that form of prose that raises goosebumps down your back:

“… and I raised my arms and drew tight the muscles of my body, and as the blood within me thudded through my singing veins, a goldness opened wide before me and I knew I had become of Men, a Man.” (Chap. 24)

“My Valley, O my Valley, within me, I will live in you eternally … for part of me is the memory of you in your greens and browns, with everything of life happy in your deeps and shades, when you gave sweet scents to us, and sent for spices for the pot, and flowers, and birds sang out for pleasure to be with you.” (Chap. 18)

A recurrent theme through the novels is the gradual covering of that green, the burying of the valley sides and trees beneath the encroaching blackness of the slag, the coal tips, which as a child I recall still covering the valley sides north of Cardiff.  Indeed the novel is narrated by an old man thinking back over his childhood as he leaves his family home for the last time, a home itself now half buried as the slag spreads ever down the valley. 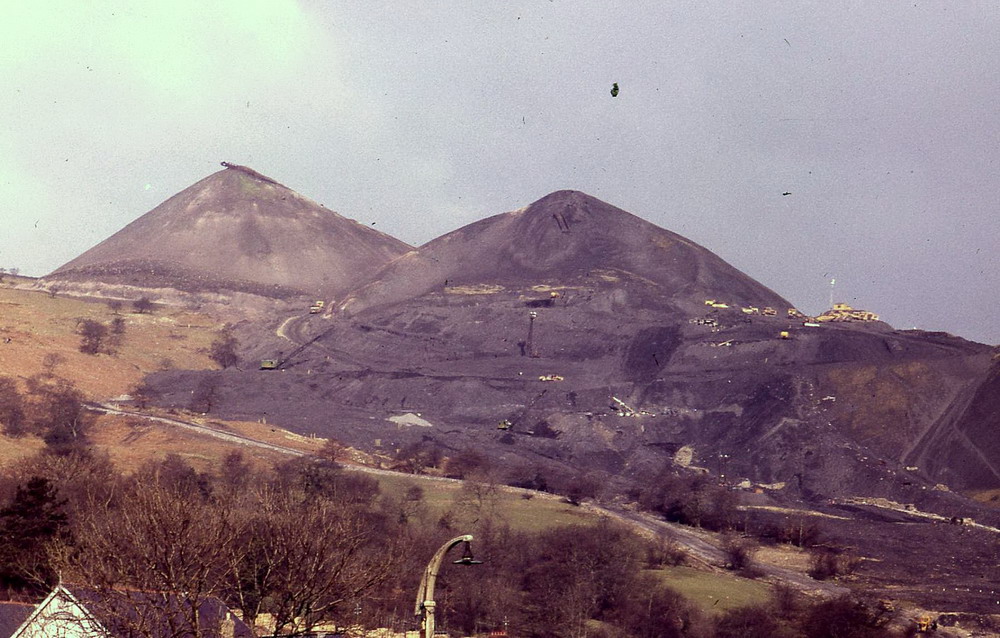 In the early days of coal mining the slag, the pieces of coal that were too small to burn, was left below the ground, rammed hard into the sides of the tunnels, strengthening and supporting them. But in the time of the book, and on throughout the 20th century, it proved cheaper and quicker to bring everything to the surface and separate there, the remains being spread upon the mountain sides in dark hills of their own, like welts upon a diseased landscape eaten underground by men.

“There is a patience in the Earth to allow us to go into her, and dig, and hurt with tunnels and shafts, and if we put back the flesh we have torn from her and so make good what we have weakened, she is content to let us bleed her. But when we take, and leave her weak where we have taken, she has a soreness, and an anger that we should be so cruel to her and thoughtless of her comfort. So she waits for us, and finding us, bears down, and bearing down, makes us a part of her, flesh of our flesh, with our clay in place of the clap we thoughtlessly have shovelled away.” (Chap. 42)

These are the thoughts of the elderly Huw looking back at the moment when he sat with his father part buried and dying after a roof fall.  Prescient today when we are at last beginning to realise how much we have taken from the earth and how little given back.

But, while the narrator is thinking of the toll taken on the miners underground by the thoughtless drive for profit and cheap coal, those brooding slag heaps remind me more of the dark repayment taken above.

One of the defining moments of my own childhood, was when, a few months after the Aberfan disaster, we drove up to Brecon along the valley road, and looked across the valley to a field of white crosses, like the images of Flanders on Armistice day, only no red poppies among the white graves, just white against green a ghastly mirror of the black upon green of the coal tip that rolled down the valley-side burying the school of Aberfan and taking the lives of  whole generation of children.