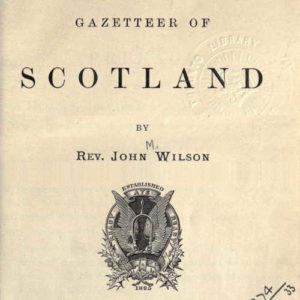 In the late 2000s, not long after moving to Tiree, I came across John Wilson’s 1882 Gazetteer of Scottish place names at the Internet Archive and thought it would be a lovely if it were properly usable as an online resource.

For various reasons I never finished at the time, but over Easter I returned to the project and now have a full online version available, browsable page by page or entry by entry.  There is more work to be done to make it really usable, but it is a beginning.

I’m using this and other digitisation projects as ways to understand the kinds of workflows and tools to help others create their own digital resources based on archive materials.  In the InterMusE project, recently funded by AHRC, we are working with local musical societies to help them digitise their historic concert programs and other documents.

The most important reason for a ‘Yes’ vote in the upcoming Scottish independence referendum is the potential for a new nation that is a beacon of a fairer, greener and more inclusive society.  This would ultimately be to the good of the whole of the UK.

However, I’ve also noted a general lack of comprehension by many south of the border who struggle to understand the desire for Scottish Independence.

This was voiced a few days ago in a Facebook thread and this was my response as a Welshman living north of the border.:

As a Welshman I have always had a romantic nationalist edge, but also felt a strong British patriotism.

However events over the years, and not least the referendum campaign have hardened this.  Again and again Westminster politicians tell us that Scotland is better with England, as if Wales and Northern Ireland did not exist.

I have heard this language all my life: in the 50th anniversary celebrations of the second World War, in numerous debates in immigration, in company registration (registered in Cardiff, a company in England and Wales, but subject to *English* law), … and has been noted several times the Bank of England.

The difference in this campaign is that this is when politicians are supposed to be being careful of their language.  We even had the government lawyer explaining that the separated rUK and Scotland would not be equally parts of a previous single nation when looking towards external international bodies, not based on measures such as the population (reasonable), but because really and legally Scotland was never a partner country in a union, but was always amalgamated unto England.

There have been hundreds of years to sort out these things, but it has not happened yet, what chance for the next 100 years?

As a  child I was pedalled a lie.

There never was, and never will be a Britain.

As a Welshman, I am as British as Indians were in the ‘British Empire’.

Within the UK I always have been, and always will be, a second class citizen.

In contrast to this Scotland (despite sectarian tensions that erupt occasionally in Celtic-Rangers crowds) accepts incomers as was amply demonstrated in the difference between the spitting bigotry of the Westminster leaders’ debates at the last General Election compared with the far more civilised, cultured,and above all inclusive Scottish leaders’ debate, with all parties, including the Scottish Conservative leader, praising the richness through diversity and immigration.

Whether it is a ‘Yes’ or a ‘No’, the shape of the UK will change fundamentally tomorrow.

If it is ‘No’, I hope the UK will eventually wake up to the fact that it is a nation of nations.

If it is ‘Yes’, then I know, that even as a Welshman far from my birthplace, I will be in a country where I can feel at home. Since post last week on migration Holyrood vs Westminster, found link on the BBC website to the  the BBC News ‘Reality Check’ on immigration that showed net outflow of non-EU.  That is migration is out of the country not in!  Also Mark Easton’s blog @ the BBC, which gives more info.  Bottom line is that the outflow is even greater then the figure of 8000 given on BBC News.

So refreshing watching the Scottish election debate last night.  The audience there saw immigration as  a positive thing, bringing fresh skills and wage earners (and tax payers) to the country.

This is in such sharp contrast to the UK general election leaders debates, where questions about immigration were  all of the “what are you going to do about …” kind and prompted the prospective prime ministers of all parties into a competition as to who could put the boot in most vigorously.  To be fair, the least anti-migrant was Nick Clegg including his memorable attempt to get David Cameron to admit that most migration was from EU countries and so not going to be affected by any of their policies.

After that UK debate the Telegraph challenged Nick Clegg’s claim that 80% of migration was non-EU.  However, BBC News 24 had a sort of ‘facts behind the claims’ slot and in their figures the net non-EU migration was actually negative; that is in the last year there were more non-EU people leaving the country than entering.  Unfortunately BBC News don’t have this information on their web site to link to 🙁  My guess is the difference in the figures depends on whether you take into account student visas where there will be a very large influx and outflux each year, and whether you simply look at  total immigration in a year or net migration.  Certainly the BBC News figures suggested that all the major parties were overestimating the ‘problem’.

The great thing in the Scottish debate was that this was not viewed as a ‘problem’ at all.